Home Brand in Focus Our Fascination with Nebbiolo Continues – SandroFay??

Valtellina’s geographic isolation in the region of Lombardy (a tucked away alpine enclave north of Milan) has produced a unique climate both in politics and in wine, having been ruled by the French, Germans, Austrians and Sardinians until finally becoming a part of Italy in 1861.

Valtellina is a cultural hive, and long had the term ‘Graubünden’ attached as an area that speaks German, Romansch, Lombard and Italian…the term ‘Relaxed Precision’ comes to mind.

When we think of the beguiling grape Nebbiolo, our thought’s understandably lead to the Langhe, the home of Barolo and Barbaresco. However true lovers of Nebbiolo or Chiavennasca as it’s known in Valtellina are looking further north for a different expression.

It’s worth noting some significant differences between this region and the Langhe with which it is inevitably compared. The clay and limestone of the Langhe is barely found here. Instead, primary rock, gravel and sand predominate. The vineyards sit at significantly higher altitudes (400–850 metres) and the climate is distinctly more alpine with less humidity. The resulting wines tend to be finer and more minerally, the fruit perhaps lighter but aromatic, fresh and vibrant. Valtellina expresses Nebbiolo in its own unique and beguiling way.- Peter Johns, PrimaveraSelections.com.au 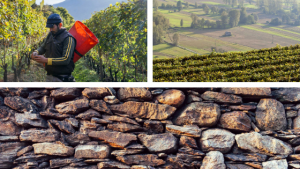 Sandro Fay is based in the small town of San Giacomo di Teglio and today is run by Sandro’s children Marco and Elena. After studying enology in Trentino and training in Barolo, Marco began producing single-vineyard wines of distinction united around the variety of Chiavennasca. All fruit is provided by the family’s terraced vineyards. Organic Viticulture is in practice here, with shorter maceration times and barrique-barrel ageing for 12 months.

The winery is situated in the Valgella district, the most easterly of the Superiore zones. Here, removed from the subtle moderating effect of Lake Como on the Western edge of the region, it’s challenging, borderline viticulture. The vineyards sit on rock with a little sand. Although blessed with perfect drainage, the vines can “do it tough” to quote Marco Fay. – Peter Johns, PrimaveraSelections.com.au 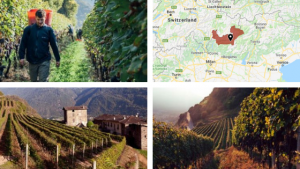 “We are committed to promoting single vineyards, which, due to their different soils and altitudes, produce wines with distinctive characteristics” – Vinify.it (Sandro Fay)

Contact vino@epicurewine.com.au if you are after more depth on the region itself and we can shoot through a PDF.

And now to the wines – Tech Notes – Peter Johns, PrimaveraSelections.com.au

Tei is local dialect for Teglio, a nearby town. This is the entry-level wine and a great introduction to Sandro Fay and Valtellina. Chiavennasca comprises 95% of the blend, with the balance Pignola, Rossola and Brugnola; some of the fruit is sourced from family vineyards nearer Sondrio. Around two weeks for fermentation/maceration and no oak seen at all. Light and bright; slightly sappy cherry fruit with saline, minerally tang, notes of alpine herbs, and gently persistent tannins.

Costa Bassa means ‘lower slopes’. In this case, between 400-500 metres, with the fruit (100% Chiavennasca) all sourced from the Valgella sub-zone. Similar ferment/maceration time to the ‘Tei’, then 12 months in large-format oak (45 hectolitres Slavonian). More juicy and fragrant than the Rosso, with hints of wild strawberry, liquorice and dark berries; great structure, precise acidity, savoury tannin and the distinct minerality that characterises these wines.

Sitting at approximately 550 metres, Carteria is recognised as one of the best single sites in the Valgella sub-zone and one highly regarded in Valtellina generally. (Marco Fay considers 500-600 metres the ‘sweet spot’ for Chiavennasca at their end of the valley.) This is their top wine and certainly needs more time to blossom. Shows more classic Chiavennasca/Nebbiolo characteristics in the denser, chewy tannins, balsamic and liquorice root flavours and more ‘earthy’ feel. This is the one for the cellar.

Coming from their highest vineyards, this is a perfect example of how appassimento (rack-drying) performs this far north, and at this altitude. At 800 metres, you would struggle to produce a conventional table wine, as grapes just won’t ripen at this height, but with on average 10-11 weeks appassimento, Marco Fay manages to achieve an incredible power and balance in this wine – a much more structured, leaner version than what you would find with an Amarone in the Veneto. Though it seems counter-intuitive given the ripening constraints to keep the acid high, Marco picks the fruit around five days earlier than for his Chiavennasca from lower altitudes.

Contact the Epicure Wine Team in Western Australia and South Australia to get your hands on some.