Feudo Montoni is one of Italy’s best but still relatively little known estates. I have no doubt that this will all change soon enough because there are few estates anywhere in Italy making more compelling wines today. – Ian D’Agata, Vinous.com

An Island location with high altitudes of between 500-700m. Feudo Montoni is certified organic with an artisanal cellar dating back to 1469 and a talented third-generation Winemaker at the helm, Fabio Sireci, who’s Grandfather Rosario bought the property in the late 1800s. Producing many of Italy’s most celebrated 100% indigenous varietals – Perricone, Nerello Mascalese, Catarratto, Grillo, Inzolia and Passito – in addition to the purest expression of Nero d’Avola. This is the region that was once ‘the granary of the Roman Empire’ – fertile and covered in wheat. 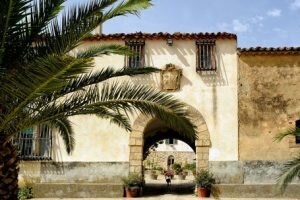 Located in the Valledlmo region of central-western Sicily, there has been a strong focus on organics, being kind to the earth and replenishing the soil. Striving to give back to the countryside, and respecting the people who live off the land. The old-vine material has proven to be an invaluable resource, and many other Sicilian producers have sought cuttings. Sicily can be very hot however it also snows at Montoni, and the vines are high enough in elevation to moderate the heat. These are some of the highest plantings of Nero D’Avola, and the white grapes are planted at over 1000 meters, plus there is a steady prevailing wind off the sea to the north.

To speak about organic agriculture is not a simple task for many reasons. It’s a philosophy…it’s a life system. Organic is a very delicate concept and very broad. It does not only indicate the omission of chemicals or of pesticides. In Nature, everything is bios, everything is life, a life in equilibrium and perfection…but then, man’s intervention comes into play and that equilibrium is broken, and there are major consequences in the present, and especially for the future generations. – Fabio Sireci, FeudoMontoni.it

Cover crops such as fava peas and honeysuckle are rotated through the vineyards to condition the land and abstain from using any chemicals. “We keep the vines rustic, so the foliage is free to express itself” – Fabio Serici.  The property has an extensive planting of Eucalypts which creates a menthol character in the wines. Fertilisers are limited to organic manure and mulched vine prunings, allowing the vines to find their natural balance amongst the native herbs and flowers.

In Sicily, it is easy to make full-bodied wine – much harder to make elegant wines. Fabio is chasing elegance in his wines, and wines that display character and place. – Kristen McGann, International Wine Specialist

Contact your #epicwine rep to get your hands on some.